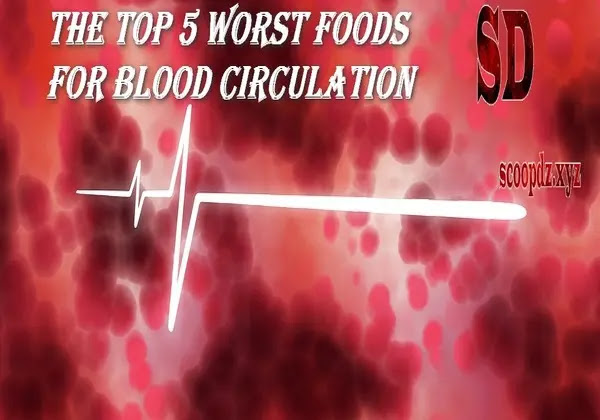 Do you have a feeling of heavy legs? Do you see unsightly varicose veins appear? A sign of a blood circulation problem, one French person out of four would be concerned. If we know which are the vein tonic foods to privilege to fluidify the blood, we do not always know, on the other hand, which are those to avoid? To help you, here are the top 5 worst foods for blood circulation.

When we suffer from discomforts such as heavy legs, cold feet, or varicose veins, it is often a sign of poor blood circulation. In addition to practicing physical activity on a daily basis, diet is also essential, because let’s not forget that health comes from the plate!  Cooked fats are among our top 5 worst foods for blood circulation. Once cooked at high temperatures, they represent real waste in our blood vessels and in our bodies. They are mainly refined oils, polyunsaturated vegetable oils that break down into lipid peroxides and aldehydes, considered carcinogenic agents. In addition to being bad for your circulation, these cooked fats are aggression for your digestive tract and vectors of inflammatory diseases (cardiovascular diseases, cancer, obesity, etc.). Avoid corn or sunflower oil and choose extra virgin olive oil, which is rich in antioxidants and releases fewer aldehydes during cooking. As a general rule, for your health, it is advisable to vary the fats as much as possible by using the cold or at the end of cooking.

As for trans fatty acids, they are also harmful to our health and blood circulation. Industrially produced, they are found in hardened vegetable fats, such as butter or margarine, but also in snack foods and fried foods. Considered a toxic chemical, the WHO recommends limiting their consumption to less than 1% of total energy intake.

2.  Foods rich in sodium, harmful to the bloodstream

Our minimum sodium requirement is one to two grams per day. Most of the sodium in our body is found in our blood and interstitial fluid. Sodium is a mineral that is essential to the health of our body because it :

It is also found in the composition of salt, which is why eating too much salt can cause significant health problems and alter blood circulation. According to several studies, an excess of sodium causes a significant risk of water retention in our bodies. As a result, blood pressure increases as the heart has to work harder to cope with this water overload, which can cause real damage to the blood vessels.

For your health, take the time to know the sodium content of the foods you eat. Avoid industrial products or other prepared meals, as 75% of the salt we ingest comes from processed foods. Instead, opt for raw products, cooked at home with controlled seasoning.

If you suffer from heavy legs, boost your blood flow with our sugar-free Circulation gummies. Formulated with red vine, blackcurrant, cherry stems, and vitamin C, these 100% vegan gummies also help fight against water retention. To know more about it, discover how to relieve the heavy and painful legs.

For the greatest regret of sausage, bacon, or ham lovers, cold cuts are part of the industrial foods to be avoided if you suffer from bad blood circulation. In addition to nitrites and nitrates, which are particularly harmful to health because of their high carcinogenic potential, deli meats should be avoided because of their high salt content. These foods are considered bad for blood circulation. When consumed in excess, deli meats promote the appearance of plaques that stick to the arterial walls and slow down blood circulation. Following several analyses of the lifestyle habits of approximately 450,000 people aged 35 to 69 years, it has been shown that there is an increased risk of cardiovascular disease and cancer among consumers of deli meats. It should also be noted that there is a 45% higher risk of mortality among people who eat 160 grams or more of deli meats.

4.  Cheese in moderation for healthy arteries

Cheese contains a lot of cholesterol, including bad cholesterol (LDL), and increases hypertension. Considered saturated fat, it is part of the top 5 bad foods for blood circulation, especially for its high salt concentration. Cheese tends to promote the deposition of plaques that narrow the arteries, which is why it is not recommended for people at cardiovascular risk. Nevertheless, cheese also has many benefits depending on its many varieties. It provides a significant amount of folic acid and essential amino acids. Considered one of the main sources of calcium, consume it in moderation.

Added sugars are bad foods for blood flow because they weaken blood vessels. On the label, it is difficult to distinguish these added sugars because they are confused with naturally occurring sugars. They are classified as “carbohydrates with sugars.”

You wonder then how to identify them? As a rule, they are mainly industrial products, such as pastries or prepared sauces for pasta. Let’s say it’s all the sugars added during the industrial process by the manufacturer. They can be added in the form of powdered sugar (sucrose), glucose syrup, or fruit juice in beverages or in salty or sweet foods.

In addition to the fact that these added sugars are bad for blood flow, they are also harmful to health. According to several scientific studies, their consumption increases the risk of cardiovascular diseases, type II diabetes, and high blood pressure. They are also responsible for weight gain and obesity.

In summary, if you suffer from edema or varicose veins in your legs, you should know that excessive consumption of salt, cooked fats, or added sugars is not recommended. These are indeed bad foods for blood circulation, but not only! To reduce the feeling of heavy legs, think of integrating our gummy’s Circulation without sugars into a healthy diet! Delicious vegan food supplements specifically formulated with red vine and blackcurrant to say goodbye to tingling and have miraculously lighter legs!

Your complete guide to the Keto 2022 diet Weekly food program

What foods should I choose when on a diabetic diet?