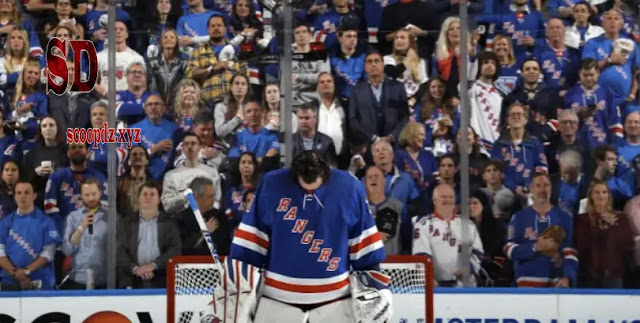 The New York Rangers’ season ended Saturday night with a 2-1 loss to the Lightning, and it’s only natural to feel like they let something slip. They won the first two games of the Eastern Conference Finals playing their best field hockey of the year, then took a 2-0 lead in Game 3 before Tampa Bay took control and never let go. Some moments will haunt fans all summer: Ryan Strome missing the puck with the net wide open in Game 5, Jacob Trouba’s penalty disrupting a four-minute power play in the third period of Game 3, or Steven Stamkos’ long shot beating Igor Shesterkin for the Lightning’s first goal in Game 6 – a weaker shot than any Shesterkin managed to turn aside. Tampa Bay has won four straight games and earned every one of them; by the end of the series, they were significantly faster than the Rangers. (Maybe two.) But it wouldn’t have taken much to swing the series the other way, or at least bring it back to Madison Square Garden for a Game 7 Tuesday night.

Still, as far as late-season losses go, this one is pretty easy to take. Make no mistake, Tampa vastly outplayed the Rangers in the deciding game and, as has been the case so often this season, Shesterkin kept his team in a game that could have easily been a blowout. But in the eyes of many experts, the Rangers weren’t even supposed to make the playoffs this season. They weren’t supposed to come back from a 3-1 hole in the series against Pittsburgh in the first round. And they weren’t supposed to come back against Carolina after losing the first two games of that series, especially since that meant having to beat a team that, until Game 7, had yet to lose a playoff game at home this year. The fact that the Rangers are playing Tampa Bay and appear to have a realistic hope of ending the Lightning’s incredible 10-game winning streak is a remarkable feat for any team, let alone a team that almost completely destroyed its roster just four years ago. In short, this year’s Rangers weren’t supposed to be this much fun.

Part of what made the vibes around this team so good was the satisfaction of a plan coming together, and much faster than expected. Seeing a team exceed expectations is one of the pleasures of being passionate about sports. The phrase “playing with house money” is often used in situations like this, but that’s the right idea here. Once they escaped the first round (and maybe even just getting there), the Rangers already had a season to celebrate. In many games this postseason, there was no logical reason to think they would win, except that they defied the odds and proved the critics wrong at every turn. Even after ugly losses, they gave fans hope against the odds, then did it again a few days later.

But the problem with a season like this is that you only get one. The Rangers will enter next season with the weight of expectation for the first time in years. They will be expected to do what they just did, or at least come close. With their roster being so young, there will be an expectation that one more year will mean one year better. The organization has some decisions to make regarding next season’s roster, but the core that fueled this year’s run will likely be more or less back. And because they’ve shown they can exceed their projections, no one is going to take them lightly next year, no matter what shortcomings the numbers might reveal.

That’s not a bad thing, exactly. That’s part of the territory of being competitive. But part of the fun of this team was the sense that none of this was meant to happen yet – that the rebuilding process was yielding results sooner than expected. It was a rare, free season, with all the advantages and almost no opportunity to disappoint. That made the playoffs unusually fun: Normally, postseason field hockey is utterly terrifying, with wins being more of a relief than anything else. But the relative lack of pressure allowed fans to soak up everything that made this team a joy to watch all season long: the sublime goaltender Shesterkin. Mika Zibanejad’s one-timer shots from his favorite spot on the power play. Chris Kreider’s emergence as a captain in all but name. The playoffs gave fans a suspenseful Game 7 and a rout. They also showed fans flashes of growth from some young players that will go a long way in determining the level of this team.

As the page turns to the offseason, this is what I will think about the most.

The Rangers played over 1,200 minutes this season, but the most memorable minute was in Game 1 of the Eastern Conference Finals against the Lightning. It may not look like much to a casual observer of the sport, but in that minute, the Rangers kept the Lightning stuck in their zone with a series of interventions and loose pucks. The Garden crowd roared at each one and eventually exploded when the relentless pressure resulted in a Filip Chytil goal that gave the Rangers a 4-2 lead.

In recent weeks, much has been made of the so-called “child line” of Chytil, Alexis Lafreniere, and Kaapo Kakko. All three are former first-round picks, and while they are still young, none of them have yet distinguished themselves as star players. At times in the playoffs, they have been the Rangers’ best line, though at other times they have been split or rarely used. (Kakko wasn’t even in the lineup for Saturday’s Game 6). But with the team’s core pretty much in place and the salary cap limiting their options, much of the Rangers’ potential lies in these three players – or the return they can bring if team president Chris Drury decides to test the trade market. Was this incredible minute – which fans quickly took to simply calling “the Shift” – a sign of an even brighter future? Was it a glimpse of the key to taking an even bigger step forward for this team next year? We won’t know the answer for some time. But we already know that next season will be very different in both cases.

How to create a PayPal account and receive money?