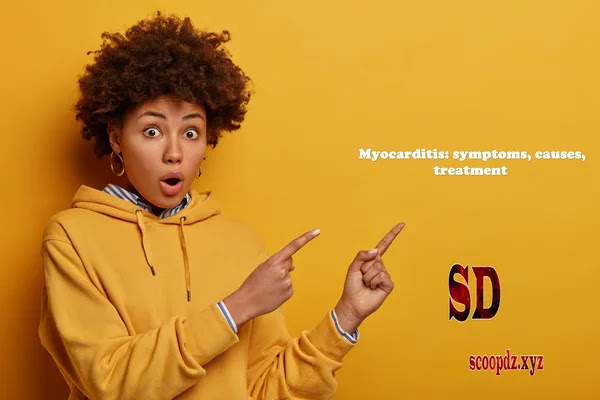 Myocarditis is an inflammation of the heart muscle, often of infectious origin, which leads to cell destruction. What are the symptoms? How is myocarditis treated? What is the connection between the Pfizer and Moderna Covid-19 vaccines?

Myocarditis is an inflammation of the heart muscle’s myocardium. The diseased muscle can no longer play its role as a pump that allows blood to circulate and heart failure can quickly set in. The cardiac systole, i.e. Asystole occurs when the ventricles’ contractions become inefficient.

It seems to be a particular autoimmune response of the myocardial tissue to various attacks, particularly viral:

Young people are generally the most affected.

Myocarditis and Covid-19 vaccines: a risk with Moderna

The suspicion of risk of myocarditis and pericarditis with the Moderna vaccine (Spikevax) has been confirmed. On November 8, 2021, the High Authority of Health announced in a press release that the vaccine Moderna against Covid-19 was now not recommended for people under 30 years.

The health authority relies on a study by Epi-Phare in association with the Health Insurance and the ANSM conducted using data from the National Health Data System (SNDS). The aim: to verify the hypotheses already suggested by several studies, and underlined by the WHO, on a higher risk of myocarditis and pericarditis with Moderna (Spikevax) than with Pfizer (Cominarty) in particular in men aged 18 to 29 years with a complete vaccination schedule.

The results confirmed an increased risk with both Pfizer and Moderna vaccines, but, “this risk appears to be more pronounced in young men under 30 years of age, particularly after the second dose of Spikevax, even though the number of cases appears to be small in relation to the high number of doses administered.”

Here’s what you should take away from the findings:

– The additional risk of myocarditis in men under age 30 would average 132 cases per million doses given.

– The risk of myocarditis is lower but also present in women under 30 years of age after the second dose at 37 cases per million doses.

– The risk of pericarditis would be 18 cases per million doses in young men.

To reassure patients, the ANSM adds that the study and follow-up of patients show that symptoms of myocarditis and pericarditis eventually disappear on their own or with treatment and that no deaths were reported over the study period. The benefit-risk balance of the Spikevax vaccine remains 90% favorable against severe forms of Covid-19, according to health authorities.

Cardiologist Dr. Stephane Manzo-Silberman explains that the forms of myocarditis are “extremely variable:” “It can range from relatively mild signs to heart failure, cardiogenic shock, and death.”

Thus, the clinical picture can range:

– from flu-like syndrome with fever, headache, aches, and pains, great fatigue, discomfort when breathing in,

– to pain in the chest that can mimic an infarction with signs of heart failure: respiratory discomfort, respiratory distress, leg edema, and heart rhythm problems that can be fatal.

– a clinical evaluation to” look for symptoms of heart failure”;

– an electrocardiogram, which” may reveal changes” in heart exertion;

– a blood test that” may reveal symptoms of heart discomfort as well as increased cardiac labels like troponin and a natural seditious pattern”;

– cardiac MRI to truly establish the diagnosis of myocarditis.

Other diagnoses are much rarer:

Myocarditis necessitates hospitalization, which lasts” at least 48 hours,” according to toDr. Manzo- Silberman.” We look for heart meter anomalies and make sure they do not progress to fulminant forms,” the croaker explains.” Fulminant forms are severe, can be aggravated by cardiac arrest, and bear particular medicines or indeed circulatory backing.”

The treatment of myocarditis is, therefore “rather that of its consequences, it is according to the repercussions, says the cardiologist. This can range from paracetamol for flu-like forms to circulatory assistance or even super-emergency transplantation for the most severe forms.”

Because myocarditis can mimic an infarction, treatment relies first on the right diagnosis.”We have to be certain that it is not an evolving infarction and that there is no artery that needs to be unclogged”. So in some cases, we do a coronary angiogram. And then, we adapt according to the manifestations. We need rest, and if there are signs of heart failure, treat that heart failure; if there are rhythm problems, treat those rhythm problems.”

In children, this condition is most commonly seen between 6 months and 2 years of age.

It is a serious disease with a fairly high early mortality. Death occurs from collapse (the heart pump becomes exhausted and ineffective) or severe rhythm disturbance (ventricular tachycardia).

After the first few days, the prognosis is a better and complete recovery (clinical, radiological, and electrical) is obtained in 3 to 18 months. Relapses are possible if pericardial therapy is interrupted too early.

Signs of myocarditis in children

The onset is often marked by a premonitory phase with digestive and respiratory disorders.

The infant presents with anorexia, abdominal pain, vomiting, and sometimes diarrhea. A coughing fit and dyspnea then appear in a more or less febrile, apathetic, adynamic child. There are often symptoms of the primary viral infection: rhinopharyngitis, otitis, skin rash, mumps, measles, etc.

After a variable duration, which can range from 1 to 15 days, heart failure is revealed:

– The infant has difficulty breathing and rapid breathing; there is a drawl and fluttering of the nose;

– Heart sounds are rapid and muffled.

Pulmonary auscultation is paradoxically almost normal compared to the extent of the breathing difficulties. The liver is painful and enlarged.

Treatment is only conceivable in a hospital setting. It consists of the administration of:

Severe forms are treated in an intensive care unit.

The fastest way to lose excess weight - a magic way 2022